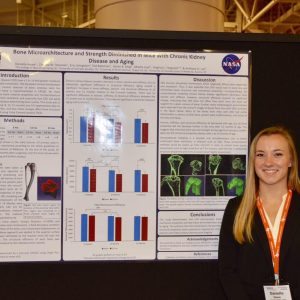 In high school, Danielle Howe loved math and science class. She also really enjoyed physics, as her teachers made the class interesting and helped make the subject easy to learn. At the same time, she was interested in the medical field.

When Howe thought about what she wanted to study in college, she thought about all of her passions and found a major that involved all of her favorite subjects. “I always had an interest in the medical field, and I loved my physics classes as well as making and constructing things” Howe says. “So when I learned about Biomedical Engineering, I knew that was what I wanted to do.”

Howe is a Senior BME major, and will be attending graduate school pursuing a Ph.D. in Biomedical engineering after graduation. She has been accepted to a few programs, but as of now has not committed to a school yet. After grad school, Howe says she’d like to work in a research lab in industry at a biomedical company.

Howe is involved with Alpha Phi Omega, the service fraternity on campus, as well as Team Engineering. As a part of Team Engineering, she gives tours of Armstrong and represents TCNJ School of Engineering at open houses to help recruit prospective engineering students. Howe was also awarded the New Jersey Space Grant Fellowship for her research.

She says TCNJ has prepared her so much for graduate school and industry jobs in the future. “Our BME program has a really challenging curriculum, heavy in labs and design projects which give you important skills you’ll need in the work setting, outside of the classroom,” Howe says. “I’ve also been fortunate to have the opportunity to do research with Dr. Lau, which I think has given me the most valuable experiences out of my time at TCNJ.”

Howe has gotten to present her research at Rutgers for the New Jersey Space Grant Consortium, as well as at the two national conferences Biomedical Engineering Society (BMES) and the Orthopedic Research Society (ORS). She says that at these conferences, she’s gotten to see really interesting new research being done at universities across the country, and meet and network with professors, graduate students and post-docs at various universities.

Howe wants to tell younger females to never let prejudice hold them back from what they want to do. “If you’re passionate for something, go for it,” she says. “I would also say don’t doubt yourself too much. Engineering can be difficult, but you might be surprised at what you’re capable of when you really put your mind to it.” 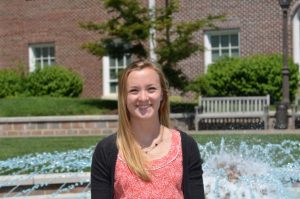