Earlier this year, four TCNJ Biomedical Engineering students from Dr. Anthony Lau’s Biomechanics Laboratory, Randolff Carpenter (’20), Benjamin Hezrony(’20), Rosalie Connell(‘21), and Chiebuka Okpara (’21), had the opportunity to attend the NASA Human Research Program (HRP) Investigators Workshop in Galveston, Texas. The meeting, which is held annually, provides space researchers at all levels the ability to meet with other members of the field and discuss current progress as well as potential ideas or collaboration for future work. After receiving encouragement from Dr. Lau, our students submitted their abstracts for the conference.  Upon acceptance of the abstracts, they had the opportunity to present their undergraduate research during the HRP Graduate Student and Postdoc Poster Session. Randolff Carpenter, Benjamin Hezrony, and Rosalie Connell presented their research projects, with Randolff and Benjamin both presenting for a second consecutive year.

Rosalie, a rising senior undergraduate student, stated, “It was nice to have professionals in the field come up to me and seem genuinely interested in my work, asking insightful questions and providing useful feedback. You are in a room with so many great minds, and this was definitely a very valuable experience especially so early on in my research career.” The conference also provided the students an additional opportunity to display their research for principal investigators at various prospective graduate institutions. Benjamin Hezrony, who will be attending graduate school at Wake Forest in the fall, utilized the conference to establish future plans in the field. “I used my spare time at the conference to network with NASA personnel, as well as interested graduate school recruiters. Having presented at the conference the previous year, and putting that on my resume in the application to Wake Forest University-Virginia Tech’s School of Biomedical Engineering and Sciences (SBES), the recruitment director for the program reached out to me in advance in order to propose meeting at the conference. I arranged this meeting, and we talked about the research I had presented. The day after, I was accepted into the Biomedical Engineering PhD program! Thus, this highly regarded conference provided me with a life-changing opportunity.” 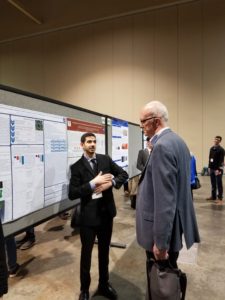 Benjamin Hezrony presenting his research to a NASA scientist.

In addition to presenting at the poster sessions, the students also had the ability to view some of the cutting-edge research ongoing in the field, including research not done on Earth. One of the Plenary Speakers, Astronaut Serena Auñón-Chancellor, discussed what it was like to conduct research in space, from extensive preparation on Earth to the research projects which included everything from cancer therapy to growing vegetables in space. Randolff, who recently graduated and will be attending graduate school at the University of Virginia in the fall, mentioned that “It was so fascinating to sit in on a talk given by an actual astronaut who has been up in space. Even more intriguing was the fact that she seemed really funny and cool, whether it was through cracking jokes on stage or showing videos of her playing with her food in space. I feel like I had the misconception that space work was strictly no-nonsense, but after listening to her present it showed me that they also want to have fun and make the most of their time up there.” The conference proved to be just as valuable to students who weren’t presenting, as rising senior Chiebuka Okpara mentioned, “I’m grateful and delighted to attend NASA HRP this past winter. Going to the workshops and poster sessions exposed me to new and intriguing research. It was a worthwhile experience as I got the opportunity to increase my network.” 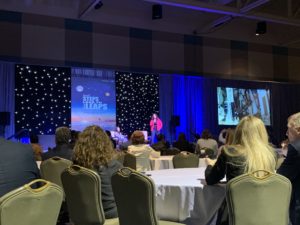 Astronaut Serena Auñón-Chancellor giving her talk on life and research in space.

As any student working with Dr. Lau knows, a lab trip is not complete without sampling some “good eats”, or delicious food in the area. The group also had the opportunity to explore the Galveston area and eat at various tasty restaurants, including meals with TCNJ BME alum, Dale Johnson ‘18 who was also presenting at the conference. As Randolff mentioned, “The importance of lab meals cannot be stressed enough, as it is a nice, light-hearted way to unwind after attending sessions all day. It also really helps build a sense of camaraderie in the lab and gives you the chance to share stories and get to know your lab mates on a different level.” The students also had the chance to visit the Johnson Space Center, where they were able to capture some memorable moments such as the picture below shown in front of a Space Shuttle replica and original Shuttle Carrier Aircraft NASA 905. 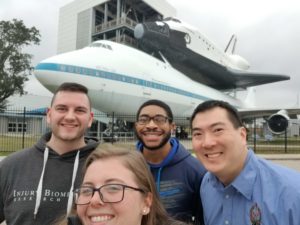 mounted on top of an original NASA 905 shuttle carrier aircraft 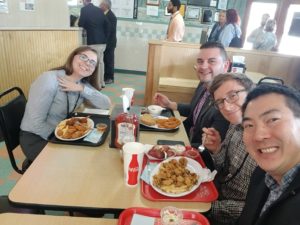