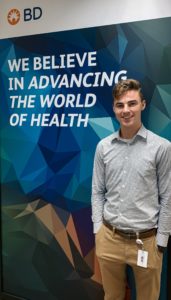 “I solved a problem that thousands die from every year.” Junior Biomedical Engineer Conor Collins recently completed an internship at Becton, Dickinson and Company (BD), ranked within the top 5 medical technology companies in the world. As a Research & Development Innovation Intern, he developed and prototyped a novel technology that could be integrated with an existing BD product to address user needs related to how intravenous catheter complications are managed.  When he shared his prototype at an intern showcase featuring presentations from students from the like of Columbia, Carnegie Mellon University and Stevens Institute of Technology, the panel of judges awarded Collins first place and the audience of BD employees also gave him the popular vote. Due to this extraordinary achievement, Conor was invited to share his work during a 20-minute presentation to an auditorium filled with hundreds of BD employees at the company’s Global Headquarters in NJ.

This was not the first time Conor invented a solution that could potentially help patients. As a high school student, Conor created a filter designed to reduce pain for individuals receiving an injection of the anesthetic Propofol, the most used anesthetic for surgeries. Of the 13 million people who receive this injection each year, 60% feel pain. Conor’s filter could help those 7.8 million people feel less pain. Conor patented this invention, and is currently evaluating licensing for the device.

As a high schooler with a patent already under his belt, Conor looked at many biomedical engineering programs to nurture his passion. Conor, who hails from New York, chose TCNJ, convinced of the high quality of TCNJ’s engineering program after speaking with Associate Professor and Department Chair, Dr. Christopher Wagner at TCNJ’s Accepted Students Day. They excitedly discussed the details of the Biomedical Engineering program and industry applications for the kinds of innovations that Conor was already working on.  Conor identified Dr. Wagner as a “man from industry” who understands how to take innovations like Conor’s from ideas to global realities that help people every day. Dr. Wagner explains, “In addition to core engineering skills, our focus is on preparing students to be engineers with the knowledge of how things are done in the medical device industry by the time they graduate, not after being on the job for a year.  These skills allow our graduates to step into an industry role and make an immediate impact, something Conor demonstrated well during his internship.”  Conor’s visit to the TCNJ campus and conversation with Dr. Wagner convinced him that attending the School of Engineering at TCNJ would be an opportunity to work with sincerely devoted professors who care, as well as an opportunity to be engaged and challenged by the rigor of being surrounded by other bright students in small classes.

Now Conor gives back to prospective students, leading School of Engineering tours, explaining: “I love to tell people why I came here…my tour guides made me want to come here.”   Conor’s work as a tour guide is part of the reason Pratik Patel, BD’s Front-End Innovation Leader at the time, now Global Marketing Manager, chose him for the internship.  Patel shares:

“The application pool was highly competitive and included undergraduate and graduate candidates from premier engineering institutions within the US. It was a tough decision, but I decided to offer the internship position to Conor given his passion for healthcare and early stage experience developing a medical device concept when he was in high school. Having an engineering background myself, I valued Conor’s critical thinking and problem solving skills. However, what set Conor apart from other candidates was the combination of these technical skills with the ability to work with multidisciplinary teams. For example, I valued his experience as a tour guide for the engineering school as this demonstrated his ability to speak to a crowd, field different types of questions, and think on his feet. Such a skill is critical and directly translatable as a biomedical engineer in industry – within the same day, you might be interviewing a clinician at a hospital in the morning and speaking with a manufacturing engineer in the evening. I look forward to staying in touch with Conor and I’m even more excited by the impact he will have in healthcare.”